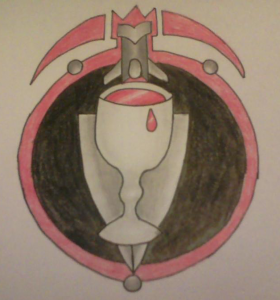 The Order of Blood & Wine

Formerly a Merdensan Order dedicated to the celebration of Qos’s more…celebratory virtues, the Order of Blood & Wine has changed their patron deity to Icarmodoro. As its name implies, this Order revels in the hedonistic and martial aspects of Icarmodoro. Their sacraments are drinking, gambling, brawling, and many other hedonistic acts considered uncouth by the people who think of themselves as “civilized society”.

A new congregation of the order has been started in Haldenweald by Bloodmaster Thrain. While he seeks out those who worship Icarmodoro, any who enjoy revelry, bar room brawls, and drinking contests are welcome in his ranks and company. Those interested in joining the Order may seek out Bloodmaster Thrain, who will undoubtedly be found in a Tavern or battlefield (probably also near a Tavern), or they may inquire with his representative at the Haldenweald Keep.

By edict of Duke Halifax, Regent of Haldenweald, the Order of Blood & Wine is is the only organized congregation of Icarmodoro worship that shall be allowed under the Church and Crown’s authority within Haldenweald. All rites to, worship of, and practices regarding Icarmodoro involving more than 2 participants must be done under the authority and supervision of the Order.

Order of Blood and Wine Quests

We promise never to spam you, only to send you important and exciting updates about our game!

The final event of the season is coming. How will